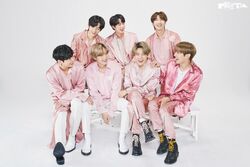 A list of unofficial songs by BTS. Original, adapted or covers are listed down below.

Retrieved from "https://bts.fandom.com/wiki/Unofficial_songs?oldid=52717"
Community content is available under CC-BY-SA unless otherwise noted.