Jung Ho-seok (정호석), better known by his stage name j-hope (제이홉), is a South Korean rapper-songwriter and record producer under Big Hit Music. He is a rapper and a dancer of BTS, also he is notable for his large input in songwriting and production in the discography in the group.

As a solo artist, he has released first mixtape Hope World in 2018. In 2020, j-hope was promoted to full member of the Korea Music Copyright Association.[5]

Jung Ho-seok was born on February 18, 1994, in Gwangju, South Korea, where he lived with his parents and older sister. Before debuting with BTS, he was part of the underground dance team Neuron. j-hope had been relatively well-known for his skills in dance prior to his debut; he won various local prizes for dance, including placing first in a national dance competition in 2008. His skills in dance eventually led him to gain interest in singing and rapping, helping motivate him to audition as an idol trainee. As a trainee, j-hope was featured as a rapper in Jo Kwon's song "Animal", which was released in 2012.

On June 13, 2013, j-hope made his debut as a member of BTS on Mnet's M! Countdown with the track "No More Dream" from their debut single album 2 Cool 4 Skool. He was the third member to join the group as a trainee after RM and SUGA. j-hope has since been involved in the creation process of every album in BTS' discography.

On June 14, 2019, j-hope, together with fellow BTS member V, collaborated with Zara Larsson on a soundtrack called "A Brand New Day" for a mobile game BTS World.

The EP debuted at number 63 and peaked at number 38 on the Billboard 200, making him the highest charting K-pop solo act on the chart. Hope World also peaked at number 35 on the Canadian Albums Chart, and number 19 on the US Top Rap Albums chart. Three mixtape tracks, "Daydream", "Hope World", and "Hangsang", charted on the World Digital Songs Chart, ranking third, 16th, and 24th respectively. The following week, the tracks grew to first, sixth, and 11th, with three additional tracks off of Hope World, "Airplane", "Base Line", and "P.O.P (Piece Of Peace) Pt.1" arriving on the chart at number five, eight, and twelve, respectively. "Daydream" peaking atop the chart made j-hope one of only ten K-Pop groups, including his band BTS, to reach number one. The success of his solo debut led him to rank third on the Emerging Artists Chart, and 97th on the Artist 100 Chart for the week of March 10 and 91st for the week of March 17. He is the fifth Korean artist, and the second Korean soloist after Psy, to place on the Artist 100. The mixtape charted in ten countries worldwide, with "Daydream" charting in three, and eventually placed at number five for Billboard magazine's year-end world albums chart.

In 2019, j-hope released a free collaboration single, "Chicken Noodle Soup", on September 27, featuring American singer, Becky G. The track debuted at number 81 on the Billboard Hot 100, with 9.7 million streams and 11,000 downloads for the week ending October 4, making j-hope the first member of BTS to chart on the Hot 100 as a solo artist outside of the group, the third Korean solo artist to rank on the chart (after Psy and CL), and the sixth Korean artist overall to do so. "Chicken Noodle Soup" also debuted at number 1 on the World Digital Songs chart and is j-hope's second song to achieve this after 2018's "Daydream".

For the three-year anniversary of his mixtape, j-hope released a full, three-minute long version of its closing track "Blue Side (Outro)" on March 1, 2021—it was uploaded to the BTS Soundcloud page for free.

His stage name, "j-hope (제이홉)", comes from his desire to represent hope for fans, as well as to be "the hope of BTS." It is also a reference to the myth of Pandora's box, as after the box was opened and all the evils inside were released to the world, the only thing left was hope.

j-hope has been described as having an upbeat and energetic tone to his music and performances. His mixtape, Hope World, was described as having a fun nature and variety of musical genres, including synth-pop, trap, house, alternative hip hop, funk-soul, and retro elements. Jeff Benjamin of Fuse wrote that the atmospheric style of "Blue Side", Hope World' s outro track, "leaves the listener curious for what's coming next from j-hope." The lyrical elements of the mixtape, notably the lead song "Daydream", was praised by Billboard magazine for its discussion of the difficulties an idol faces in their career, various literary references, and fun presentation of the serious subject matter.

j-hope cites the adventurous nature of Jules Verne's Twenty Thousand Leagues Under the Sea and the works Kyle, Aminé, and Joey Badass as influencers on his style and work on Hope World. The idea of peace has also provided a basis for much of his lyrics, stating that "it'd be fantastic to become a part of someone's personal peace through my music" in an interview with Time magazine. The idea of "representing the modern generation" has also influenced his work on BTS' music. There was also a reference to Douglas Adams' science fiction series The Hitchhiker's Guide to the Galaxy.

In January 2020, J-hope was promoted along with the fellow BTS member RM to join with SUGA as the full member of the Korea Music Copyright Association.

In 2018, he was awarded the fifth-class Hwagwan Order of Cultural Merit by the President of South Korea along with other members of the group. He had the most liked tweet in the world for 2018 when he posted the "In My Feelings Challenge".

In 2016, he purchased a luxury apartment in South Korea worth US$1.6 million for his personal use. As of 2019, he currently lives in Hannam-dong, Seoul, South Korea with his members.

Discography as a soloist 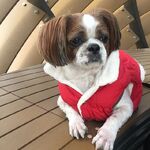