BTS World Tour: Love Yourself in Seoul is a concert film of BTS released in ScreenX. The film takes place during the August 25 and 26, 2018 shows of the band's Love Yourself Tour at Seoul Olympic Stadium in Seoul, South Korea. Its distribution is handled by Fathom Events and Pathé Live.

It was released on January 26, 2019, for one day only in 102 countries around the world. Due to popular demand it re-entered theaters in select countries on February 9 and 10, 2019.

Shot at the Olympic Stadium in Seoul during the BTS World Tour: Love Yourself, an exclusive screening of the most sought-after concert of 2018 hits movie theaters worldwide for a one-day only event. This event will bring fans together to celebrate the seven members of the global boyband and their unprecedented international phenomenon.[1]

BTS featured these two set lists for their Seoul concerts. It includes the same songs except for the title medley.

The film was first announced on December 13, 2018, on Twitter through BTS' official account. It was revealed that 42 cameras were used to shoot the film and that it was co-produced by Big Hit Entertainment and CJ CGV Screen X. The film will be available in 2D and ScreenX formats.

Tickets went on sale on December 18. The trailer for the film was released the following day.

Described by Pathé Live as the "widest worldwide release ever," Love Yourself in Seoul was released in 4,100 cinemas around the world. It is 113 minutes long and upon release day trended worldwide.

Two cities in Russia, Dagestan and Grozny, banned the film from being released after people protested it online due to "over-the-top immoral behavior" as they believed BTS showcased homosexual behavior. They made no further comment afterwards.

The concert-film grossed $11.7 million worldwide and attracted 1.2 million spectators, South Korea excluded. In South Korea it made over US $2.2 million. It broke the record for Largest Worldwide Event Cinema Release after being screen in 3,800 cinemas and 95 countries.

In South Korea it surpassed 200k spectators coming in at second for the two days it showed. In the US it grossed nearly $3 million.

Yim Hyun-su of The Jakarta Post stated "[While] the film manages to let fans interact with the group retrospectively[...] general moviegoers outside the fandom might struggle to get on the same level as fans." 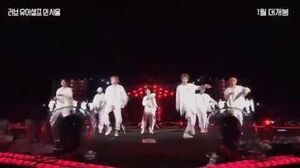