BTS World is a South Korean visual novel styled mobile game developed by Take one Company Corp and published by Netmarble which was launched worldwide on Apple Store and Google Play on June 26, 2019.

The storyline follows the player which time-slips back to 2012 becoming the manager tasked with debuting future supergroup BTS. This mode is divided into multiple chapters, all story elements and missions must be cleared and read to be able to move to the next chapter also specific player levels must be reached to unlock chapter after chapter two. There are three types of stages in this mode: Story Stages, Mission Stages and Cinematic Stages.

The player has to befriend the different members and help them solve their problems to fulfill their dreams. This season has seven different stories, each story is divided into six chapters. There are three types of stages in this season: Story Stages, Mission Stages and Cinematic Stages.

This season is divided into multiple chapters and the requirement to enter is clear all members stories until chapter three from Season 1. There are two types of stages in this season: Story Stages and Mission Stages.

This mode lets you interact with the members via mobile; such as receiving text messages, phone calls or social media feed updates from them. You are given multiple (usually up to three) options of dialogue to respond with. Each dialogue choice varies in affinity increase. Choosing the best-suited option will greatly increase the members affinity (closeness, attachment) level for the player. If responding on a members' social media feed and you decide to want to choose a different dialogue choice, the player has the option to turn back time; this allows you to take back your previous response and pick a new one, however, at the cost of using diamonds.

In this mode you can take a photos collecting certain members cards, also a special reward will be a variable when you complete the photo album set.

Each card has its own stats: "Empathy", "Passion", "Stamina" and "Wisdom" as well the Main Stat (highest stat out of all). Card ranks ranges from 1★ to 5★.

The Agency is a place where the player can check the daily schedule and manage the members' conditions. Completing various scheduled tasks and making sure the members are feeling their best increases the groups' stats and this helps to get higher scores in missions.

List of the cast and characters on the game.

The game's soundtrack, entitled BTS World: Original Soundtrack, was released on June 28, 2019. It was written primarily by musicians Kang Minkook and Lim Hyunji. 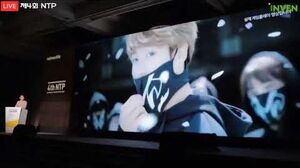 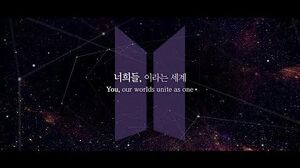 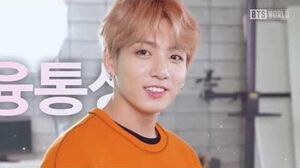 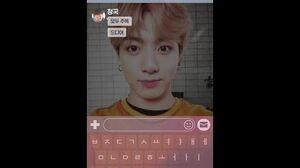 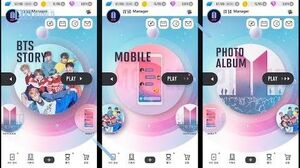 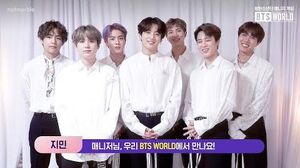