BTS Live Trilogy Episode II: The Red Bullet (stylized in all caps) was the first worldwide concert tour by BTS to promote their School Trilogy series, including their debut single album 2 Cool 4 Skool, their first mini album O!RUL8,2?, their second mini album Skool Luv Affair and their first studio album Dark & Wild, also the beginning of their Youth Trilogy series with their third mini album The Most Beautiful Moment in Life Pt.1. The tour began on October 17, 2014 in South Korea and concluded on August 29, 2015 in Hong Kong.

This tour also was the Episode II (chronologically the first) of the BTS Live Trilogy, with the BTS Begins concerts as Part I and The Wings Tour as Part III and Final. 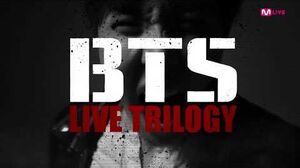 Retrieved from "https://bts.fandom.com/wiki/BTS_Live_Trilogy_Episode_II:_The_Red_Bullet?oldid=59499"
Community content is available under CC-BY-SA unless otherwise noted.